What are PPC (Pay-Per-Click) Ads?

PPC (Pay-per-click) ads is one of the most effective online advertising methods. It is because the ads are displayed when the users are actively searching for something or showing interest on certain topics.

One of the benefits of using PPC ads is that you can quickly capture target users and attract customers to your website. While there are so many advantages, PPC campaigns have some downsides disadvantages, too.

In this article, we would like to summarize and explain the important points, so that everyone can understand the basic knowledge about Pay-per-click campaigns.

2. Advantages of PPC Ads
2.1: You Can Reach Your Potential Customers Immediately
2.2: It can be Displayed Above Search Results
2.3: It can Reach the Target User
2.4: Low Campaign Launch Cost
2.5: You can Make it Cost Effective
2.6: Ads can be Improved Based on Data
2.7: Conversion Keywords for SEO

Pay-per-click (PPC) is an online marketing method to drive traffic to websites where advertisers pay publishers such as Google, Yahoo!, Facebook when the ad is clicked by users.

In general, people refer to PPC as a text-format advertisement that users see on search engines such as Google and Yahoo! when searching for certain keywords. These search engine based ads are sometimes called SEM (Search Engine Marketing)

The most common PPC ads in Japan are "Google Ads" and "Yahoo! Promotional Ads". Your ads can be posted from those services and can be displayed in the top or bottom of regular search engine results. The placed ad will indicate as “Ad”

What You Can Do with PPC

You can create your own ad text and submit it as an ad.

There are restrictions on the characters and symbols that can be used. Each advertiser changes the rule constantly. For the latest information, please check with the official site of each medium.

How PPC is Different from SEO

PPC ad can start showing as soon as you launched an ad and it is approved by each publisher. You can do this quickly when you register your account and complete your ad, keywords, and bids. Unlike SEO where it usually takes several months, the advantage of PPC ads is that they can start appearing quickly.

Another advantage of PPC ad is it can be displayed above natural search engine results. If it is displayed at the top of the search results page, it catches more attention and clicked more often.

​You Can Reach Your Potential Customers Immediately

As stated above, the advantage of listing ads is that you can reach users quickly.

By posting PPC ads, you can start drawing targeted users who search for a specific keyword to your website from search results. This way, users can immediately flow to your website.

You have control of attracting customers to your website when and as soon as you need to bring them.

When attracting your target audience, consider the relevance of your search query to your ad and the message on the landing page to which you will be sending traffic to.

It Can be Displayed Above Search Results

Depending on the competition and quality of your ads, it can be displayed at the top of natural search results.

Major PPC platforms display your ads based on how much you bid on the campaign. For example, if you submit an ad with high relevance to the keyword you are bidding and the bid is higher than your competition, your ad can be exposed and ranked higher in search results, which will increase the likelihood of your potential customers see your ad and click it.

It Can Reach the Target User

One of the advantages of PPC ads is that you can focus on specific genres and reach interested users.

You can reach targeted users by choosing the keywords to target. For example, if you want to attract users who are interested in SEO services, then set keywords such as "SEO services in Japan", "SEO Service Agencies" or  "How SEO Service Works". Users who search or these keywords typically are looking for or at least considering about SEO services.

If you can create ads to fulfill these users search intent, then highly relevant ads can be posted, This makes it easier for the ad to be exposed in the search results and to reach the target user.

PPC ads, unlike traditional ads, do not require the cost of producing creatives. Once you decide what message to send out to the audience to search a certain keyword, you can simply create text-based ads to those audiences.

The cost to publish it is low.

You Can Make It Cost Effective

You can increase the cost-effectiveness by raising the Quality Score of your ads.

In PPC, there is a concept called Quality Score which scales 1-10 about how good the quality of the ads is from publishers view. They are measured based on considering the relevance of search queries and ads, the clickthrough rate of ads, and the convenience of landing pages to which ads are linked.

PPC publishers favor high-quality ads over highly bid ads. This means high-quality ads will generally pay less. If you can publish ads with a high Quality Score, it will increase your cost-effectiveness.

In this way, you can cost-effectively managed to reduce advertising costs and increase conversions. Adjusting your maximum CPC after raising your ad rank is another key to improving your cost-effectiveness.

Ads Can be Improved Based on Data

With PPC ads, you can view the performance of your ads in data. It is easy to go through the PDCA cycle because you can improve your ad based on detailed metrics such as clicks, conversions, and impressions.

Use Conversion Keywords for SEO

If you run PPC ads, you will have a deeper understanding of what keywords users search then convert. Based on the keywords that converted on, you can choose what keywords to go after on SEO.

Suppose set up SEO keywords related ads and find out that the keyword "Google SEO” will bring a high conversion.

In this case, if you can create content and optimize your web page round this  "SEO Google" keyword, your web page can rank higher on this keyword to bring users relevant to this keyword. You can expect to earn SEO conversions. One of the advantages of listing ads is that you can collect data and decide how to build your website for SEO.

The disadvantage of PPC ads is that they have a certain operating cost. Because advertisers use pay-per-click advertising services that operate with CPC bids, you'll always have to pay every time your ad gets clicked.

While the advantage of PPC ads to let you start a campaign to bring traffic quickly, it is also a disadvantage of PPC that the traffic stops quickly once your ads are turned off.

Although it will take more time and energy, if you can improve your SEO skills, you can attract customers without continuous investment in the campaign. In such cases, SEO is more cost effective than PPC.

Users may not Favor Ads

Since PPC ads will be indicated as “ad”, some users may avoid clicking it over naturally ranked search engine results.

If your ads had high Quality Score and bidding higher than the competition, your ads will most likely be displayed at the top of the natural search results. It will be clicked often. However, the click-through rate for natural search results may be higher. In Japan, online users tend to avoid online ads more so than in western countries.

PPC uses a cost-per-click (CPC) system, and there is no charge if the ad is not clicked.

The specific fee system will be examined below.

The PPC advertising cost per day is the sum of CPC (cost-per-click) x clicks. If you set a daily budget, your daily advertisement will be limited to the budget. More specifically, your daily budget x numbers of the month will determine the monthly budget.

If the advertising platform determines that spending more on the day can be effective, then the ad spend may go over the daily budget. Overall, the average daily budget throughout the month will be about the budget you specified.

Another factor to determine the CPC is Ad Rank. It is calculated by "bid price" x "Quality Score". The higher your Quality Score, the lower you have to pay in CPC to rank at the top of the SERP.

From the image below, Sue and Jane are bidding lower than Bob. However, they scored higher Ad Rank than Bob due to the “High” quality score.

Which means, even though their bids are lower, they will likely to pay less than Bob. 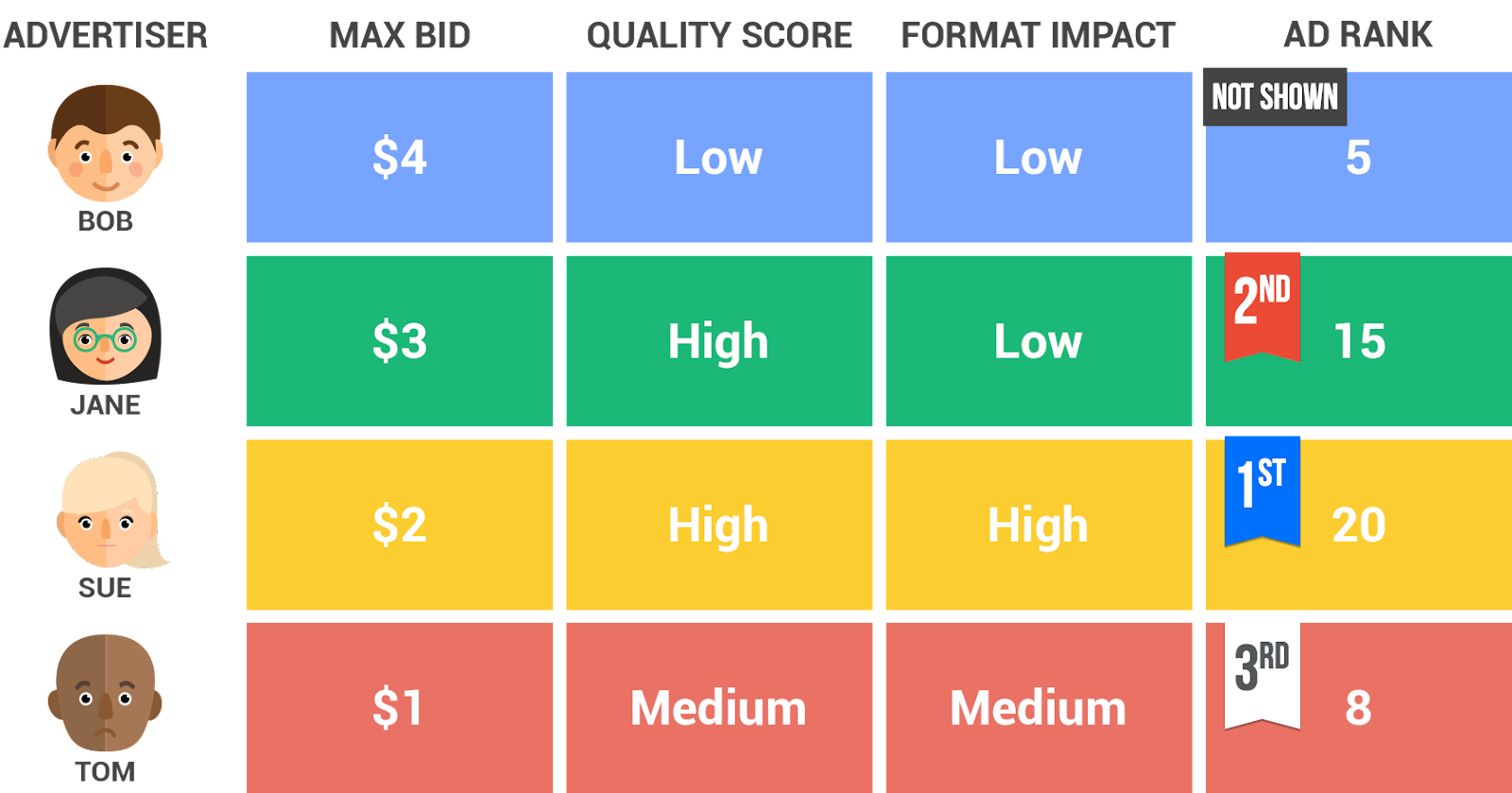 Not only Jane and Sue will pay less for a click, but also their ads will likely be listed at a higher position than Bob.

Bob has the highest bid among the 4 advertisers, but because he has the lowest Quality Score, his ads will rank the lowest.

Sue has the lowest bid, but she has the highest ad rank and therefore ranks first.

When considering launching a PPC ad, it is important to have a basic understanding such as what is PPC ad, how much does it cost, and what kind of results you can expect.

It is important to have an expectation of the results and the energy you can invest before launching a PPC Campaign.

If you don't have enough knowledge or not confident in launching PPC ads, there is an option to seek help from a professional. If you ask for help from an agency, there will be an initial investment. At the same time, there is a good chance that you can operate your listing ads effectively and cost-effectively.